Feeling that lump…oh, I would say from that point, it felt like a train ride that started with a lurch and slowly departed from a quaint station where all things were lazy and beautiful. With each chug, the worry and concern grew. I knew in my bones the next stop would be somewhere dark and sinister.

Let’s pretend for a moment I didn’t end up getting the cancer diagnosis. The train ride between wondering and knowing is an actual experience. It’s physically and emotionally happening. If you or anyone you know, ever goes through a cancer scare, it’s actually a real thing. It’s ok to affirm that it’s really scary, that it really sucks. It would be appropriate to bring a meal or flowers. It’s a real thing to get the testing and and have to wait over the weekend wondering if this is your last trip to the farmers market as just you…how you knew yourself without cancer. 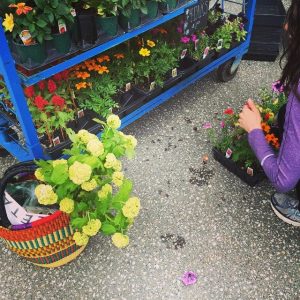 It was the night before the first diagnostic tests that Brent and I fought until 2am with windows open on a beautiful spring night. We were yelling. I’m sure the late night dog walkers lingered to listen (I would have if I were out there.) I wanted to make sure he was the man I needed if I got cancer. I didn’t say it like that, but that’s what he heard. I screamed at him, swore at him, flipped him the bird when he was yelling at me. It was as if we hadn’t learned anything in 17 years of marriage.

He was like a child who couldn’t see the darkness about to descend on our home. He could only hear my judgement and harsh tones. I was like a captain trying to prepare my army for a battle. We were missing each other completely. Both frantic. We wore ourselves out, moved toward some modicum of tenderness and fell asleep.

Early next morning, cocooned in my big, cozy, orange sweatshirt, I headed over to the hospital. After a smashing time with the mammo tech, I headed in for my ultrasound. The radiologist walked in with a resident after viewing my first images. The first words out of his mouth were, “Do you have a history of breast cancer in your family?” “No.” They rolled over “the suspicious mass” and armpit for a quite some time.  As their eyes were on the screen, my eyes were on them, studying them for tells. Do they know already?  They must be very good poker players. I asked the doctor nothing. He explained that they wanted both a breast and lymph node biopsy. After he left, it occurred to me to ask the tech if my lymph nodes were enlarged. Her back to me as she entered the order, the key-tapping paused and then finally, “yes.” Oh.

I called Brent and told him that more testing was required. He said, “I’m so confused. What does this mean that you’re getting a biopsy? Is this normal?” That’s when my compassion grew triple fold. He didn’t see it coming. He’s always been too optimistic to expect something like this. I like that about him. But, I needed him to start feeling this with me. So he did. With the exception of my sister Neely, we were alone with our growing concerns. We started accepting the possibilities. Tears at night. Tears in the morning. Tears in the garden. Tears in the driveway before walking into a dinner party. It was before anyone else really knew; and so we quietly carried our burden. But it was okay—beautiful actually—because we carried it together.